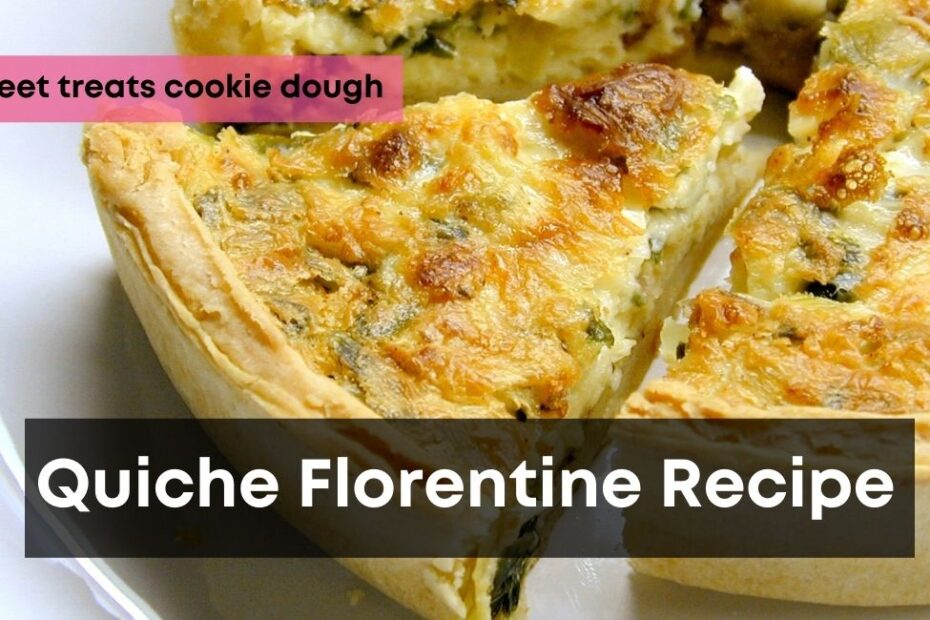 This Quiche Florentine is a traditional quiche recipe from France that has spinach and is versatile enough to serve as breakfast, lunch, dinner, or even a speedy snack. This quiche is certainly delectable and adaptable because to the use of cream, eggs, spinach, and gruyere cheese in its creation.

Quiche in the Florentine style

Eggs are a food that both my husband and I like eating, and as a result, any recipe that has a significant amount of eggs is bound to be a big hit in our home. This meal is not an exception to that rule. Because this recipe is so adaptable, it is the ideal opportunity to use up any unused ingredients that you have in the refrigerator.

When you take that first bite of quiche florentine, the Gruyere cheese will not only melt in your tongue, but it will also melt in your heart since it has such a robust flavor. Spinach is the main component in quiche florentine, and there is a lot of it. It should come as no surprise that consuming it at any time of the day is beneficial given that it is made with wonderful fresh eggs, tasty shallots, rich cream, and a heaping helping of nutritious spinach. If you want to give it some additional love, you can add broccoli, mushrooms, different kinds of cheese, finely sliced red pepper, or anything else you wantștiiștii.

Quiche, a meal that has become synonymous with France, really has its roots in Germany. This may come as a surprise to some people. The English term “quiche” originates from the German word “kuchen,” which literally translates as “cake.” Did you know that in French cuisine, the name “a la florentine” is typically given to any meal that contains spinach and is prepared in that style?

What Ingredients You’ll Need to Make a Florentine Quiche

Crust for the pie

Make a half batch of my pie crust recipe, or buy one that’s already been prepared and frozen. In most cases, I will prepare the entire pie crust recipe and then divide it in half to store in the freezer until I am ready to make another pie or quiche. When I want to utilize the pie crust, I just let it thaw in the refrigerator over night after defrosting it successfully from the freezer.

In order to keep the sodium content of my cooking under control, I always use unsalted butter.

Shallots, when chopped, contribute a great deal of flavor.

Fresh spinach that has been roughly chopped.

The greatest results are achieved with heavy cream that has at least 30 percent of MF and imparts a flavor that is satisfyingly creamy.

Gruyere cheese that has been crumbled. It is necessary for the preparation of this dish.

The Florentine Method of Preparing Quiche

Make the crust for the pie:

Rolling the surface of the quiche pan with a rolling pin allows you to trim away the excess dough that is around the edges of the pan. Pie weights, dry beans, or rice can be used in place of rice to fill the crust after it has been lined with parchment paper.

Prebake the crust without topping it (blind bake):

For pastries purchased from a store:

If you are using pastry that you purchased from the shop, make sure to follow the instructions on the packaging.

GET THE FILLING READY

To prepare the spinach,

Mix together the eggs and the heavy cream:

Place the eggs and heavy cream in a bowl of a suitable size for you to use. Stir the liquid carefully.

Put the quiche together by:

After sprinkling the bottom of the crust that has been precooked with half of the cheese, cover it with the spinach filling. Place the spinach in a large bowl and carefully pour the egg mixture over it. Add the remaining grated gruyere to the top.

After transferring the quiche to a baking sheet, bake it at 375 degrees Fahrenheit for 35 to 40 minutes, or until the top is golden brown. While the remainder of the dish should be firm, the center should have some give to it.

Relax and be of service:

Allow the quiche to cool for ten to twenty minutes, which will allow the filling to completely set. Using a sharp knife, cut the meat into thin slices, and serve either hot or at room temperature.